In 1787, the United States boldly stepped forward in the glorious light provided by their unique new Constitution. The confidence of the citizenry blossomed. The economy expanded in the assurance that one’s labor was one’s own. The nation became invigorated and the transformation was miraculous! The nations of the world stood in awe of the newfound strength and hope of this free land.

In the twenty-first century, America is in need of a miracle. The United States Constitution is again that miracle. It must be applied as vigorously and purely as it was in the beginning. Today’s national challenges can be traced to a divergence from the original intent put forth in the Constitution.

To Preserve The Nation is a call to action that statesmen of the caliber of the American Founding Fathers must be raised up. The timeless wisdom that established the United States must again be vigorously applied. The foundational principles must be learned, understood, and embraced.

The results will be as they were in the beginning. America may become again the freest, most prosperous, most respected, and happiest nation on earth. It is the intention of this lecture series To Preserve The Nation to begin that restoration. 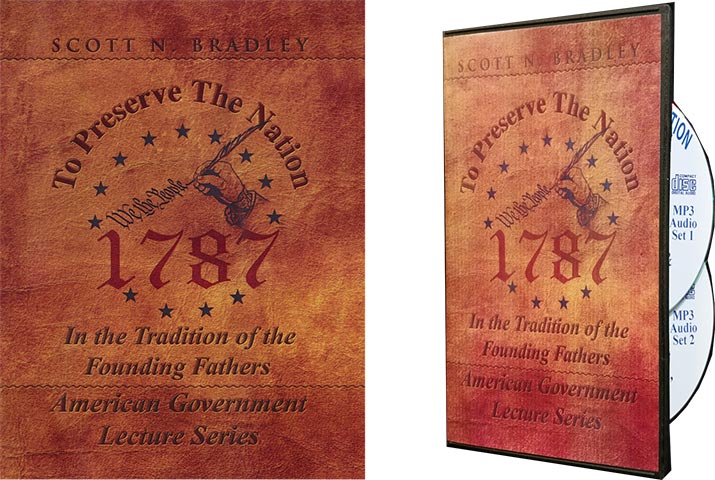 To Preserve the Nation Book and Lecture Series Material

Sets the purpose and tone of the lecture/chapter material and introduces the student to the scope of the book and the lecture series, touching briefly upon the various subjects to be covered in the series.  The subject-matter covered in each lecture (1-16) correlates to and reinforces the subject-matter in the respective chapters in the book (1-16) — chapter 1 to lecture 1; chapter 2 to lecture 2; chapter 3 to lecture 3; etc.

In spite of decades of effort by revisionist historians to unseat the truth, America, first and foremost, was a spiritual nation. Many today believe that America is a “commercial” nation, based solely upon economics. While people came to America for a lot of reasons (including economics), the under girding foundation was of a spiritual nature. This lesson will review much of the evidence that supports this truth.

Where do liberties come from? Are they granted by government? The Founding Fathers of the United States clearly understood that if government is the grantor of liberties, it may also withdraw liberties. Individual God-given rights form the basis and purpose of government as understood and established by this nation’s founders.

In America, government power is divided and subdivided. Even sources of power are kept separate. This is designed to prevent government from accruing and consolidating power to the point it may become a tyranny. The principles established for the American government were designed to prevent the common tendency recognized in human nature to accrue and then begin to abuse power. Not only were powers granted to the national government divided and subdivided, they were also specifically listed so the limits of the power would be clearly understood and checks and balances between the different branches of government were created to ensure that the branches were kept within the bounds set within the Constitution.

A whirlwind tour of American history, from the voyage of Columbus forward to the modern era. This lecture is not intended to be a comprehensive examination of all that has occurred in those five hundred plus years, but to set a context for much of what the nation is experiencing today.

The straightforward form and substance of the United States Constitution is reviewed.  The student will recognize that its plain English words are easily understood and that every American of normal intelligence has not only the ability to understand the Constitution but also the duty to understand the document and demand that the leaders of the nation abide by it.

Chapter/Lecture 6: The Bill of Rights and Other Amendments

The Bill of Rights were written and ratified to prevent the national government from misconstruing or abusing the powers that were granted to the national government, adding “further declaratory and restrictive clauses” to the Constitution to ensure that individual God-given rights were not infringed upon. Some of the more recent amendments were not so well conceived and will undoubtedly pose challenges to the nation as it moves forward.

In a manner similar to the review done within the Declaration of Independence, wherein the offenses of the king were reviewed to justify the action that was being taken, this lesson reviews some of the current violations of constitutional principle that are common in this modern era. While this lecture is not a comprehensive compilation of all modern violations, the student will be able to confidently begin to identify areas where the leadership of the United States strays from their oath to uphold the charter of the nation, the United States Constitution.

Chapter/Lecture 8: Of Money and Economics

A proper financial foundation is critical to the freedom of the people of a nation. The Founding Fathers clearly understood these principles and unequivocally incorporated them into the form of government they created for the United States. The nation has strayed far from those principles, and the financial foundation of the nation is crumbling. A restoration of the foundation is possible, but only if the people of the nation are willing to first understand the correct principles, and then insist that the original principles be applied.

In spite of strenuous efforts by many today to foster the concept that there is no linkage between morality and liberty, the founders of the United States clearly understood that a moral people was required for a nation to be truly free. A virtuous people is necessary for freedom to reign. The liberty of the nation requires a moral foundation. Liberty, as envisioned by the founders of the nation, was not licentiousness, nor is it based upon license to violate baseline principles of morality that have been clearly defined for most of history. In the beginning, the people of the nation, by and large, bound themselves to those moral principles not because of draconian legislation, but because they firmly believed that each individual would ultimately face their God and be judged by the works they performed while in mortality.

Chapter/Lecture 10: The Right to Keep and Bear Arms

The Second Amendment to the United States Constitution has generated a great deal of controversy in modern times. Many promote the idea that this right to bear arms is not an individual’s right, which is protected by the Constitution. The clear and well-spoken views of the Founding Fathers will be reviewed to dispel this misconception.

Chapter/Lecture 11: Of Education and Freedom

The Founding Fathers of the United States were unequivocally committed to the necessity of an educated populace in order to preserve liberty throughout the nation. However, the education process must confirm in the hearts and minds of the people of the nation the sound, firm principles upon which liberty and proper government are based. False philosophies that undermine or destroy the correct principles will facilitate the destruction of the nation’s freedom. This lecture will review the approach to education that was used as this nation was established and compare and contrast that approach with modern educational paradigms that promote false educational ideas to the detriment of the preservation of the nation. The Humanist Manifestos and the philosophies contained therein will be considered at length in this lecture.

Published in 1796 as George Washington neared the completion of his second presidential term, this marvelous document reflects the love and devotion manifested by George Washington’s forty-five selfless years of service to his nation. In this address, he offers timeless, priceless advice to his nation, pleading with America to stay the course that had been established under the United States Constitution. If American leadership had unerringly applied his counsel, or if they would begin again to vigorously abide by it, the nation would be quickly restored to its place as the freest, most prosperous, happiest, and most respected nation upon the earth. This lecture encourages all to become familiar with Washington’s sound counsel and again insist that it be applied by American leadership. Approximately five hundred vocabulary words selected from George Washington’s Farewell Address are included in the appendix of this book. The definitions of these words, taken from Noah Webster’s 1828 publication, An American Dictionary of the English Language, are included so students may clearly understand and learn the words as they were understood by the Founding Fathers of the nation. This will facilitate future studies of the founding documents of the United States of America.

Understanding The Communist Manifesto is critically important so the student may understand the concepts that are contained therein and how they are diametrically opposed to the concepts upon which the liberty of this nation and its proper government are based.  The student will see how the false philosophies contained within The Communist Manifesto threaten all that is of worth to humanity. Americans need to clearly understand what the adversaries of freedom believe and what they promote so appropriate measures may be taken to defeat their efforts.

Chapter/Lecture 14: All Revolutions Are Not Created Equal (The American Revolution vs. Subsequent Revolutions)

The American Revolution and French Revolution were contemporary with each other, but the basis of each were diametric opposites. Subsequent revolutions will also be reviewed, and the student will come to understand that virtually all modern-day revolutions are descendants of the false philosophies and tyranny imposed by the French Revolution. In spite of vigorous efforts by many in media, government, and education to convince Americans that other subsequent revolutions are simply reflections of the American Revolution, the student will receive the foundation to compare and contrast so they may understand the truth.

George Washington was one of those rare mortals who could be handed power but would not abuse it. He would be no tyrant, in any way, shape, or form — ever. Throughout his life, power was thrust upon him by those who would have him lead. He constantly made efforts to deflect power from himself, but the nation insisted, and he had power imposed upon him by a nation that desperately needed a leader to bring liberty to them. George Washington was the indispensable man in the establishment of the United States. He fulfilled his assignments with gracious humility, and each time his assignment was complete, he divested himself of the power he had been granted as quickly as he could. Numerous examples of Washington’s character and how he elegantly handled power without being corrupted by it are reviewed in this lecture.

Chapter/Lecture 16: Our Sacred Honor: Our Modern Duty to Preserve Our Liberty

This lecture is a sort of “capstone” lesson that compares the sacrifices of the founders of this nation and our modern-day duty to preserve the liberties and proper government that were bequeathed to us and our posterity at such great cost. What the Founding Fathers of the United States did, they did largely for their posterity. Many knew when they made the efforts that established the liberty of America that they, personally, would probably not live to see a complete fulfillment of their dream of liberty for this land, but they saw in the nation they were establishing a great hope for their posterity. In like manner, those modern Americans who inherit this land have a similar duty to restore and preserve the blessings of liberty for their posterity. This lecture encourages this generation to step forward and measure up to this duty.